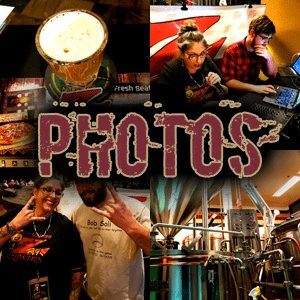 Ah, beer. It’s saved the world, ruined relationships, and brought Frost & Tim Buc Moore together for a perfect moment weekday afternoons on Z-Rock… Just around 5:30PM Frost cracks open a cold one and tells you about the brew: the ABVs, the mouth feels, the reach-arounds… all the good stuff.

She’ll let you know what she thinks. Then she’ll try to predict Tim Buc Moore‘s Morning Blind Drunk Take. He tries out the beer as well that same morning (there’s a 5:30AM too after all), but he has no info. No label, no description, NOTHING but the beer itself. All together it’s a Beer Service Announcement where we tell you all about the craft beer revolution, which brews are sessionable, and which ones are…well, shower beer.

[UPDATE: As Frost is high risk for COVID-19 and doing her afternoon show from home, our weekly Friday on location broadcast is on hold indefinitely]

Beer-30 is sponsored by Feather Falls Brewing Company, and every Friday, Frost does the show live from right there at the brew-pub and one of the 19 reliably delicious concoctions is featured with expert information on food pairings and more by people who actually know who they’re talking about.

At the end of a long week, we all need some insurance that the featured brew is gonna be good, so thankfully these two shining beacons have come together!

It’s Feather Falls Brewery week on #Beer30 Monday we sampled the “Raging Raptor” a Czech Pilsner which is AH mazing. Stay tuned all week for …